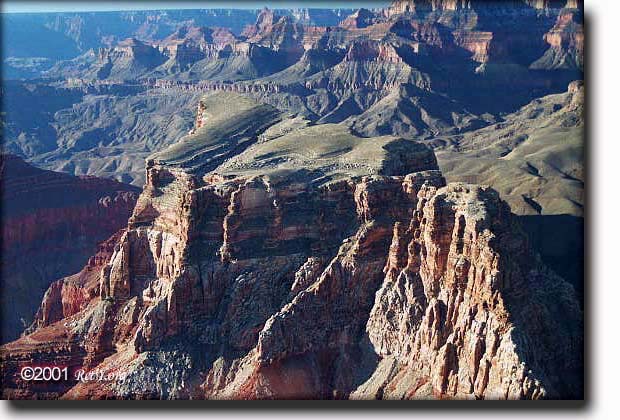 Photo of Chuar Butte by kind permission of RetY.org

Young Earth creationists (YECs) refer to the Grand Canyon as a "monument to the world-wide Flood".  Despite the compelling evidence to the contrary they continue to claim that the Grand Canyon was carved by the retreating waters of Noah's flood.

In keeping with YEC's unscientific claims concerning the Grand Canyon,  Tom Vail has written a book, Grand Canyon: A Different View.  Mr Vail has this to say:

For years, as a Colorado River guide I told people how the Grand Canyon was formed over the evolutionary time scale of millions of years. Then I met the Lord. Now, I have 'a different view' of the Canyon, which,  according to a biblical time scale, can't possibly be more than about a few thousand years old.

Mr Vail also describes the book as containing "informative essays and stunning photos".  He's right about the photos, they are stunning.  But the essays are pure YEC rubbish as evidenced by the authors, namely, Dr Henry Morris, Ken Ham (surely the most scientifically illiterate at Answers in Genesis (AiG)), Drs Andrew Snelling, Gary Parker and Kurt Wise, et al., YECs all.

YEC organisations, particularly AiG, are claiming that the book has been banned.  This is nonsense.  The book has simply been removed from the natural sciences section of the Grand Canyon National Park Service bookstores and placed under the appropriate category, that is, in the inspirational reading section.

On AiG's web site their objections border on the farcical:

If this book stays in its current 'inspirational' spot, then the bookstores should move its evolutionary books to be placed alongside it, for these texts also present a worldview (an evolutionary one) and are thus also 'religious.'

The YEC view of the Grand Canyon's history is pseudo science at its best.  Below are some links to real scientific material which explains accurately the history of that "geological paradise" the Grand Canyon.

Bibliolatry Revisited: A Review of "Grand Canyon: a Different View"
Wilfred A. Elders

The Trail of Time
"The Trail of Time is an interpretive walking timeline trail that focuses on Grand Canyon vistas and rocks to guide visitors to ponder, explore, and understand the magnitude of geologic time and the stories encoded by Grand Canyon rock layers and landscapes."