"This month's Mad magazine... has a feature on the the 20 dumbest people, events, and things of 2007, and guess what won a slot on the list?"
--Pharyangula 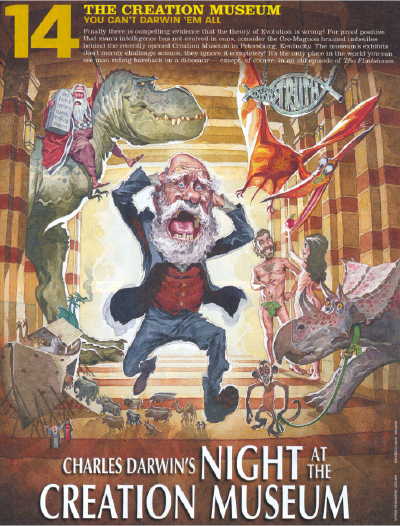 "I admit I was dismayed by what I saw at the Ken Ham museum. It was alarming to see so much time, money and effort being spent on making a mockery of hard won scientific knowledge. And the fact that it was being done with such obvious sincerity, somehow made it all the worse".
--Robert Winston, British scientist, politician and Television presenter, from the BBC documentary "The Story of God".

On 28 May 2007, in Boone County, Kentucky, Answers in Genesis (AiG) opened what is laughingly referred to as a museum. For more on AiG's absurdity see:

The evolutionary foundation of Ham's Creation "museum"
John Stear, July 2007
Ham's "museum" is built on the very fossils it denies

The Anti-Museum: An overview and review of the Answers in Genesis Creation Museum  (off site)
Daniel Phelps
President, Kentucky Paleontological Society

Let there be retards (off site)
Ian Murphy

Somewhere back around the time that AIG's Creation Museum opened in Kentucky, SF author and blogger John Scalzi issued a challenge to his blog readers: if they'd contribute $250 or more in a week to a charity fund, then he'd visit the museum and report back on what he found. They did. He did. He put it off for a while, but finally did it a few days ago. Now he's posted the result at his blog.

Answers in Genesis' Creation ''museum'': a repository of the absurd
John Stear

The Anti-Museum: An overview and review of the Answers in Genesis Creation "Museum"  (off Site)
Daniel Phelps, President, Kentucky Paleontological Society

Creation Museum - A Preliminary Review   (off Site)
Greg Neyman, Answers in Creation, First Published 13 April 2007
"Even in this brief walk-thru, it is easy to see the flawed science and wrong Biblical interpretation used by Answers in Genesis.  Once again, the world will laugh at young earth creationists (and in doing so, at the church as a whole), as they try to pass off their bad science as the truth."